How can a creature so small have such a lasting impact?

The term “Butterfly Effect” was coined during the development of Chaos Theory–a scientific theory that grew out of complex weather forecasting–which contends that all the cycles on earth that look chaotic are actually systematic and interrelated. Consistent with this theory, the flapping of a butterfly wings in South American can affect the weather in Europe. 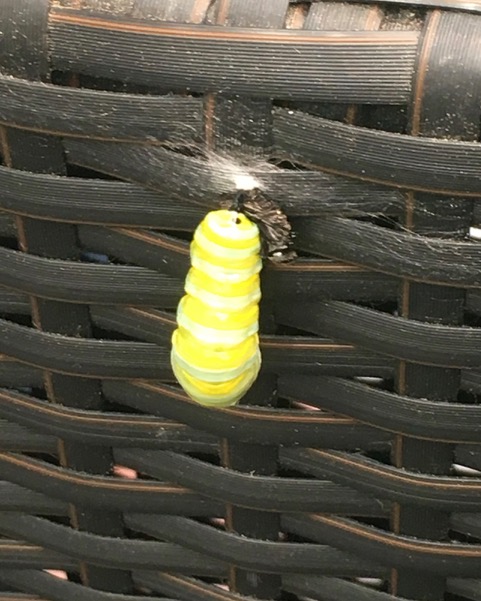 Those of us working on the Journey’s Flight project have witnessed another butterfly effect. These tiny creatures help connect people who care about the survival of the threatened species.

As we were well into spring 2017, and finishing up Journey’s amazing migration story, teacher Susie Werts received an email from Nancy Best, a resident of Bend, Oregon. Nancy had been visiting her mother in Orange County, California in late April 2017. Monarch butterflies were enjoying her mother’s garden. There were Monarch caterpillars munching milkweed and some chrysalises were attached to the wicker patio chairs.

One chrysalis had become detached, probably by one of the many squirrels that enjoy Best’s mother’s yard, and was lying on the ground. Nancy scooped up the undeveloped chrysalis, to take it back home in Oregon. Once home, she placed it in a jar next to her plant seedlings and forgot about it until her mother called and said the other chrysalises were hatching in California.

As Nancy inspected her orphan, she realized it was very much alive and would soon be hatching. She needed help and advice. She wanted to be sure she did the right thing for this precious threatened species. 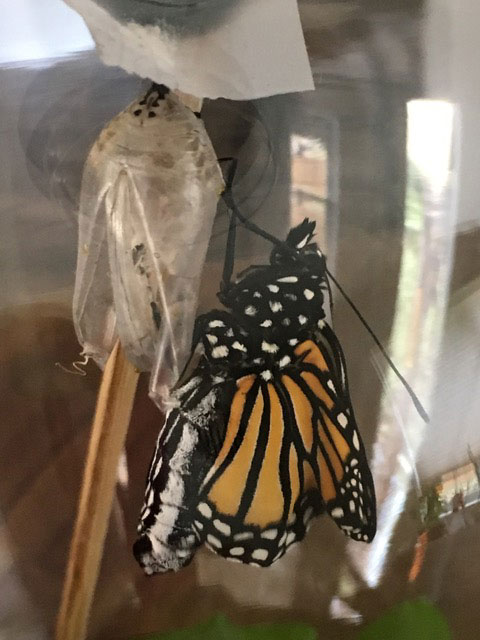 Teacher Werts was delighted to help. She told Nancy how to tape or glue the chrysalis upside down so that it could successfully hatch and suggested offering it cantaloupe or watermelon for emergency nectar until Best could provide fresh nectar flowers.

Susie’s suggestions worked. The butterfly hatched. Naming the female Monarch butterfly Poppy, Best took it to the U.S. Forest Service Office newly constructed waystation in Bend. Their staff offered Nancy the opportunity to tag her winged fledgling, which she did with tag number A6544, one digit different from Journey’s tag number A6504. 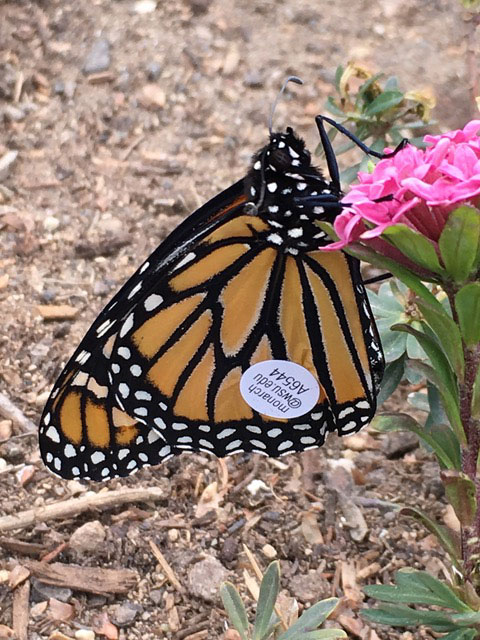 With uncertain reluctance and concern for Poppy’s success, Nancy released her baby into the butterfly waystation.

“They promised to look after her,” said Nancy. “It was hard to turn her loose.”

Will Poppy be seen again? She is part of the spring Western Monarch butterfly migration cycle. Spring hatchlings have a shorter lifespan than fall butterflies. However, spring 2017 hosted an extraordinary season for flowers due to abundant rain and snow. Poppy enjoys a high probability of success. Many people watch out for Central Oregon Monarch butterflies. She could be seen again and her tag number reported to monarch@wsu.org .

“Poppy’s story makes it feel like everything has gone full circle,” enthused Susie Werts. “This is the new beginning. She almost feels like she is Journey’s baby. This is what spring is all about.” 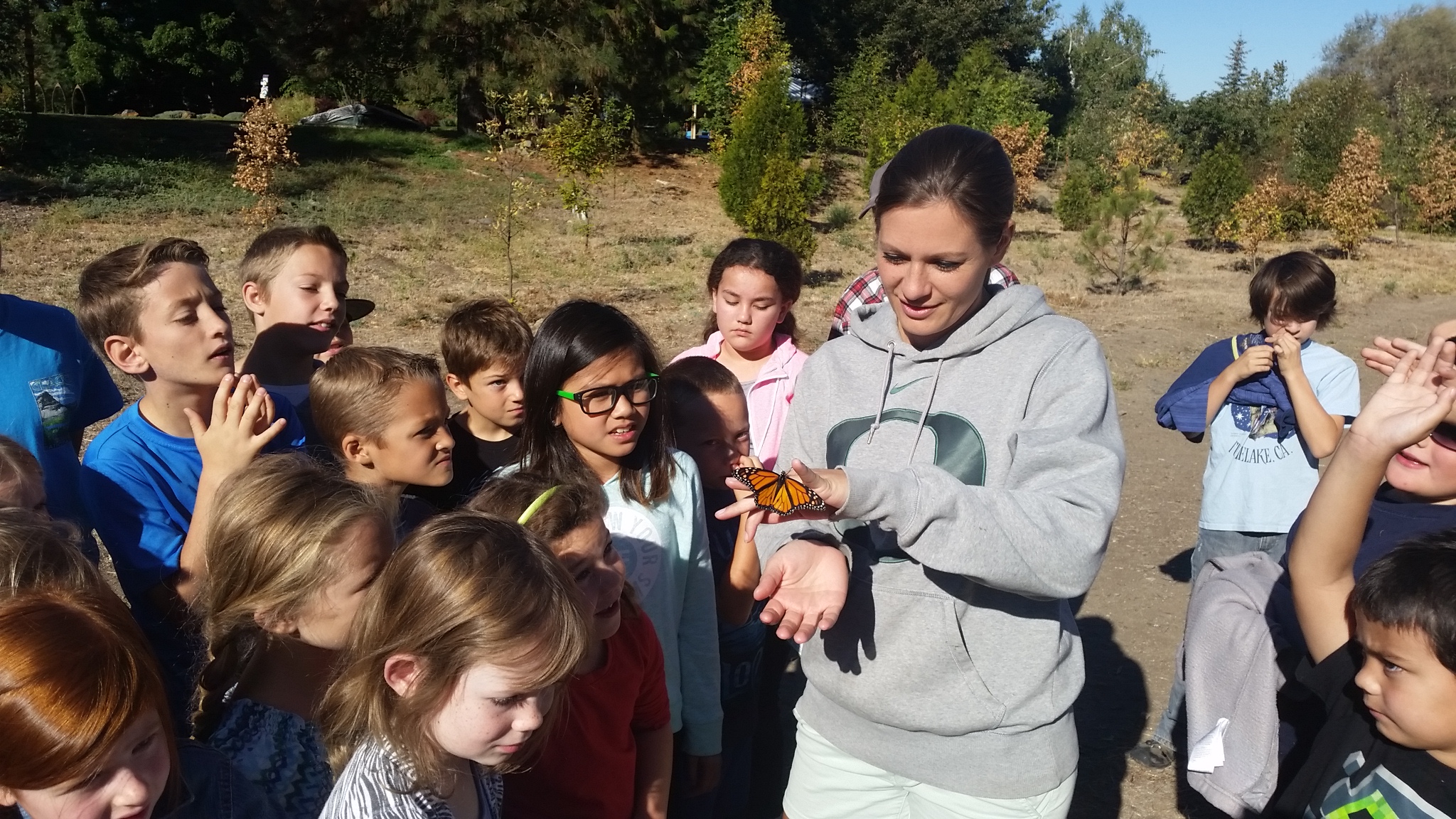 Our way-station did not even exist earlier that year; no milkweed, no garden.

Then, when I went back down to the new way-station to tag and release one butterfly, I ran into two school buses from Talent Elementary School on a field trip. I invited the kids over. They were enthralled. They all gathered ’round, we had a quick “Monarch” talk, and we tagged and released him together. He flew straight and strong right up into an ash tree.

Then, it was Dr. James who spotted Mr. A2045 on a tree in a Bi-Mart parking lot in Bolinas in a large cluster of about 10,000 Monarch on News Years Day! A butterfly from a waystation that did not even exist a year before! 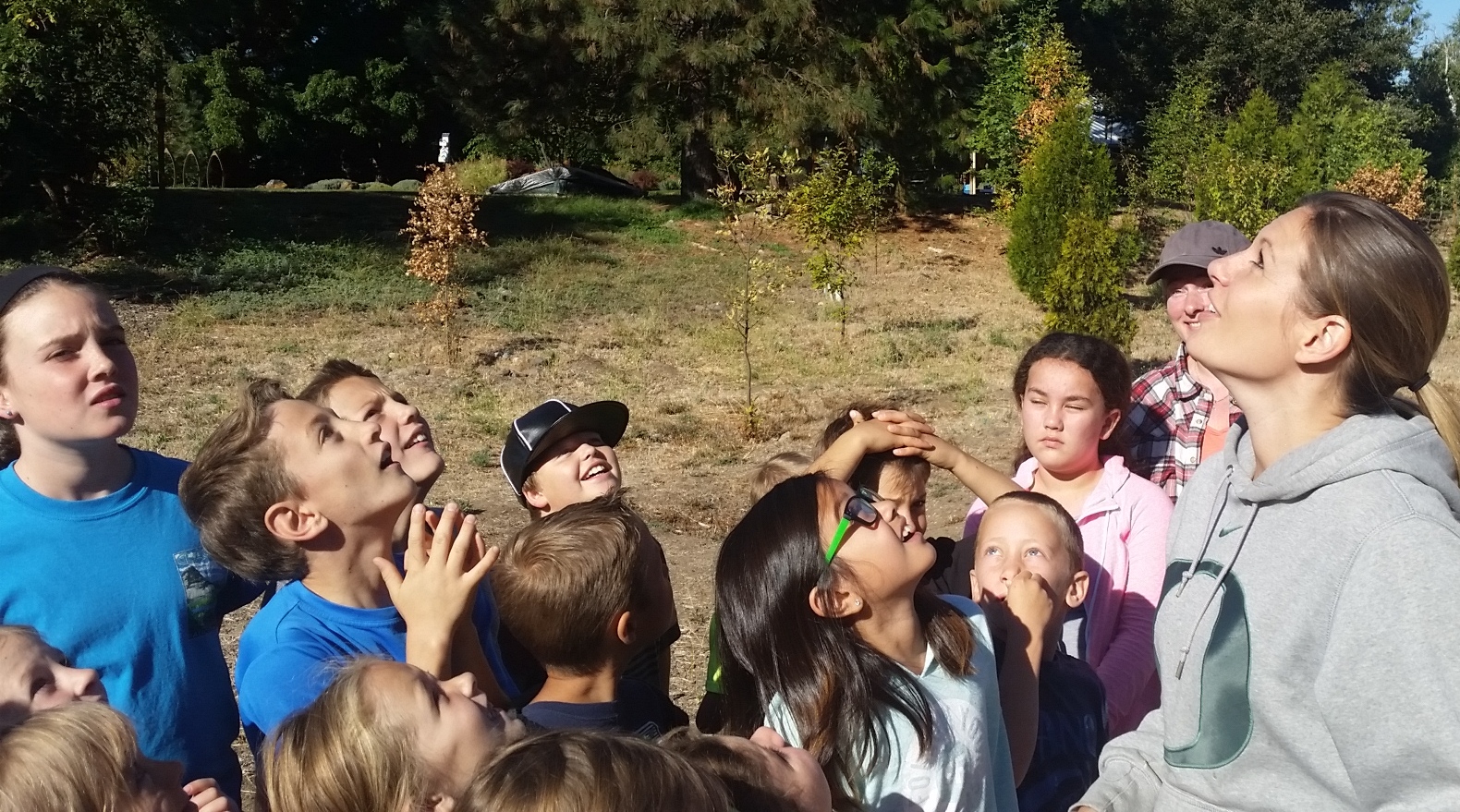 Then, Mr. A2045 was seen again in the same cluster, which was now down to about 5000 (per Dr. James) about six weeks later in February.

Dr. James said that was significant because it really showed that Mr. A2045 was part of the overwintering population of our wonderful western monarchs that “made it” through the winter, and would help to start the northward migration soon in the spring.

A good example of the cliche “if you build it, they will come”! 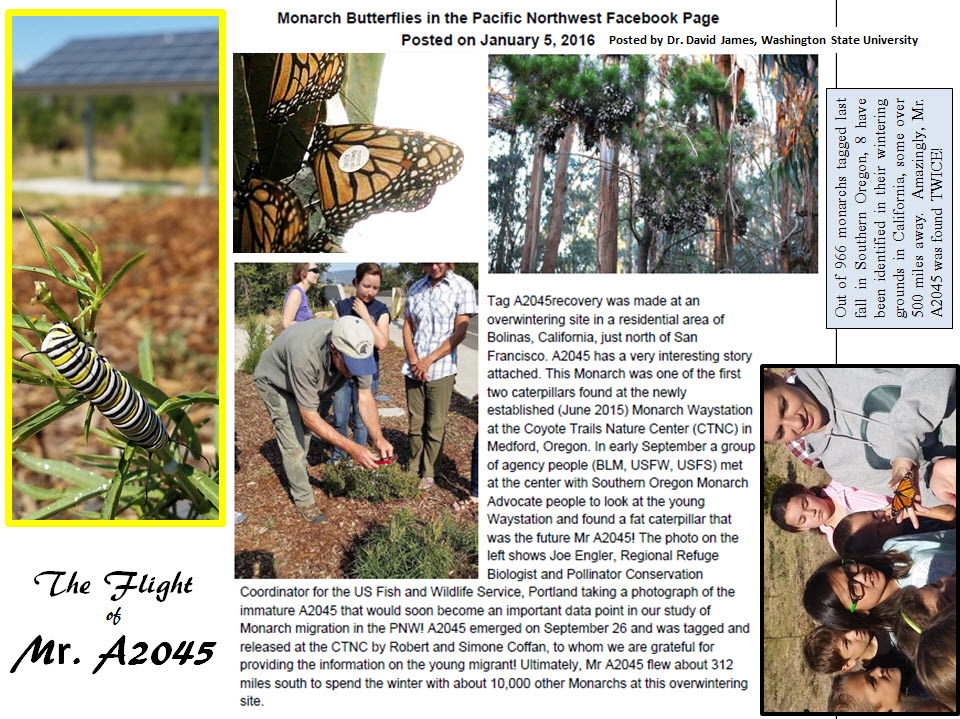