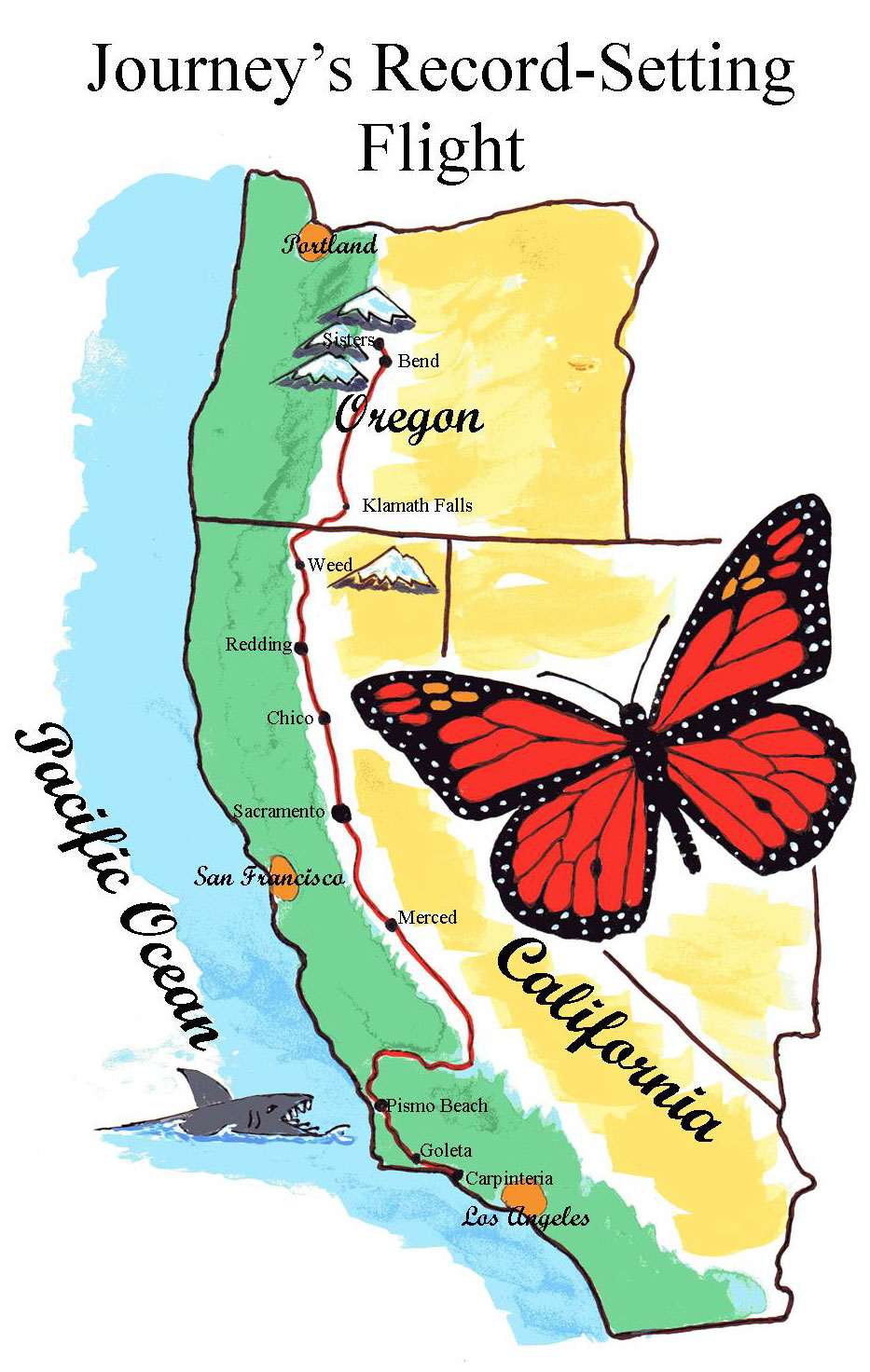 Journey was tagged and released by Sisters Middle School teacher, Susie Werts’ son, Kellen on September 17, 2016 from the middle school’s new butterfly way-station.  Journey survived a daunting trip and managed to migrate all the way to Carpinteria, California, more than 700 miles.  That was the longest recorded migration of any Monarch from Oregon.

This story is based upon a real event.  Journey, a Western Monarch Butterfly did hatch at Sisters Middle School in Central Oregon, in September of 2016.  He did fly more than 700 miles south setting a record for the longest migration flight of any tagged Oregon Monarch butterfly.  In November 2016, his tag number (A6504) was reported in a butterfly sanctuary in Carpinteria, California.  Those facts we know.  Individuals were there to witness and document Journey’s presence in Southern California.  The rest of Journey’s migration narrative had to be developed by the students based on what they had learned about Monarch butterflies.

How each story was developed 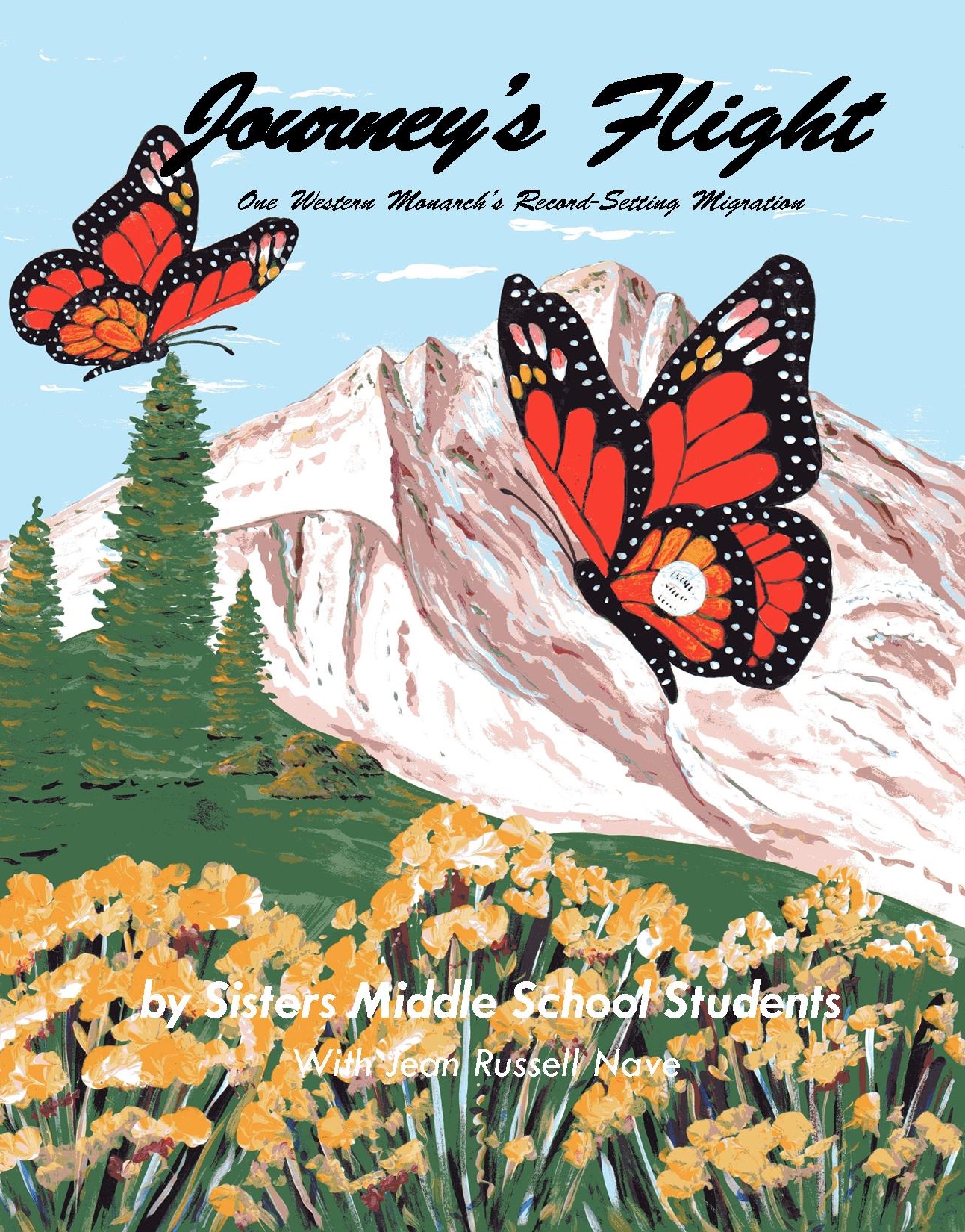 Author Jean Russell Nave spent three weeks researching Monarch butterflies and studying Google Earth for a feasible migration route between the release site in Central Oregon and Carpinteria, Journey’s final destination before meeting with student to develop the chapters for the book.

Based upon available natural resources, she assembled a viable migration route and had Dr. David G. James, Associate Professor of Entomology at Washington State University review it.  He agreed with part of the proposed route and suggested a modification for the final leg to the coast.  Using Google Earth, Jean explored the passes across the California Coastal Range—since migrating butterflies often follow roads.  Some routes were totally barren in the fall but one, Highway 58 west of Bakersfield, offered butterfly food resources.  They agreed to use that route as the basis of the story.

In coordination with Sisters Middle School teacher, Susie Werts, Jean met with students to discuss their story ideas and the likely encounters Journey would experience on his long flight.  Most of the story development occurred during each chapter’s 50-minute interview with the contributing students.

After each interview Jean developed each chapter based on the students’ imaginative ideas.    Are the student’s stories farfetched?  It is hard to know for certain.  What we do know is that these precious butterflies, weighing less than a paperclip, face abundant and daunting dangers.

The students’ last names have been omitted to protect their privacy.

The back of the book is filled with many expert developed articles to offer the reader professional resource information.

Some basic information about Monarch butterflies

A Monarch butterfly develops through four stages: egg, caterpillar, chrysalis and butterfly.  To survive, Monarch caterpillars can only eat one kind of plant– milkweed. This limitation requires that the eggs be laid only on milkweed plants.

Once the caterpillar becomes a butterfly, its primary food source is flower nectar.  Not all flowers have nectar.  Bees can feed on both nectar and pollen.  Like bees, Monarch butterflies move pollen from plant to plant but they can only feed on nectar.

Bees and other pollinators are in decline, including the threatened Monarch butterfly.  This decline could be critically detrimental to man’s food chain if it continues.  Different pollinating species pollinate different plants, each has a specific task in nature; all are critical.  This is why the dramatic decline in Monarch butterflies and Monarch conservation efforts are vitally important to us all.